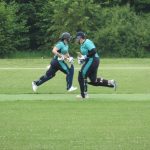 CICC Women started off the season with 2 matches away at Royal Brussels Cricket Club. Due to the current situation, we had only been able to train a few times beforehand. Still, you could feel the energy pulsing as soon as we arrived at (the pitch in Brussels. The weather started out rather rainy in the morning, but ended with a few sunburnt players.

The first game started at 11:00, CICC lost the toss and were put in to bat. Monika Loveday and Suzy McAnanama-Brereton opened the batting with a first wicket stand of 88. Sharmaine Mannan and Peris Wadenpohl finished the innings by pushing the score to 135.

The second innings started with some tight bowling from Frauke Powell, with a run out and a wicket in the first over. Super fielder Monika manged to get two run outs with direct hits from a tight angle, as well as taking a catch after having performed extremely well as an opening batter. The bowlers kept the score to 117 runs for 6 wickets. CICC won the first match despite the captain losing her shoe and breaking her thumb while fielding.

Between matches, RBCC organised an amazing barbecue with vegan and vegetarian options. During the lunch break the lawn was mowed and the umpires enjoyed a beer.

The second match started with CICC winning the toss and the fearless captain decided to field! The Cologne girls took two early wickets, with Bindu managing to get a run out and Monika (our super cricketer) taking another catch! Unfortunately, that was the end of the wickets for CICC, as RBCC had a very good third wicket partnership despite good bowling. They managed to get some good shots in and scored 136 runs.

The second inning started with a change of the batting order. Peris and Monika opened the batting, and were going along very well until they both got out in about 3 balls during the 5th and 6th overs. Sharmaine and Suzy (with her broken thumb) came in at the right time and finished the game in the 16th over with some aggressive batting and running.

The day ended with happy faces and a promise of bellies full of Belgian waffles for the winning team.